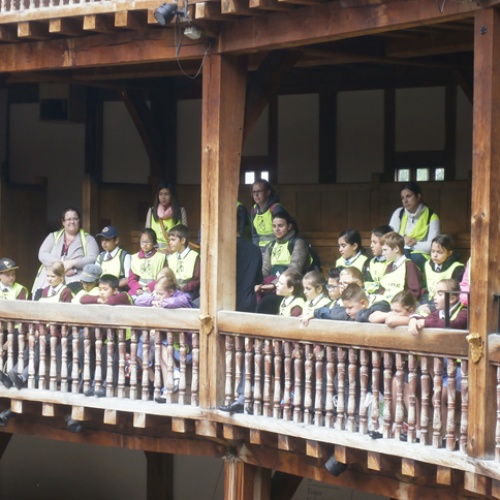 In June, Years 3 and Year 4 both undertook trips to our capital city.  The London trip linked to their Creative Curriculum learning about The Tudors and both year groups enjoyed a visit to The Globe Theatre, where they heard about the vicinity of the theatre in Tudor times.  The children were fascinated to hear that London was a walled city in Shakespeare’s day and enjoyed the gory detail about the heads of traitors on spikes atop the walls! They learned that The Globe was built outside the city walls because theatre was deemed an unfit pastime in Puritan England and playhouses were banned from the city of London!

Following the tour of the theatre, we worked with actors from The Globe in their rehearsal studios.  We focussed on drama techniques, representing characters from plays we had read in school, including the characters of Olivia and Malvolio in Twelfth Night.  The children enjoyed using Shakespearean language to represent the characters and were complimented on their enthusiasm and co-operation.

The trip to London also presented an opportunity for the children to link to our British Values curriculum by gaining a general overview of the history and culture of London.  We took in the main sights of London, including Big Ben and the Houses of Parliament, the London Eye, the Tate Modern, St Paul’s Cathedral and the Shard.  The children were particularly fascinated by the different architectural styles of the buildings, but liked Big Ben best of all!

Finally, the trip fulfilled two of our Westfield Pledge promises, for the children to have the opportunity to travel by train and by boat.  For some children, it was the first time they had travelled on a train and the majority of the children said they had never travelled by boat before.  The short trip from the London Eye to The Globe by boat proved tremendously exciting to all the children and they particularly enjoyed seeing the police and fire brigade boats going along the Thames beside them!

Our London trip gave the children a host of opportunities to extend their learning and their life experiences.  Fellow train travellers  wrote to say how well behaved they had been and one passenger on the train commented on how confident, polite and articulate the children were when talking to each other.  We are delighted our children are such good ambassadors for Westfield Primary.